Well, it's been an interesting summer,

We had an amazing trip to see Papa's family in Singapore and had time to catch up with lots of old friends, as well as mananging to take a short break to Thailand, staying in a friend's villa - it was lovely.

But all of this was happening whilst our house was being re-built. We have a home by the river and, unfortunately, whilst this seems idyllic it also means that occasionally bad things happen - like the garden seeming to subside or the ground floor sinking. But we agreed that it could all be fixed whilst we were away on holiday. Except when we came back, it wasn't. So the poor dogs had to stay in kennels for an extra week whilst we went first to Granny's and then onto a rented apartment in London, near Papa's work.

That was great fun as we were able to do lots of touristy things, like the Tower of London and the Cutty Sark and then meet Papa afterwards and still have dinner as a family.

It was after one of the trips that we decided to stop off at a local pub and wait for Papa there whilst I had a cheeky glass of wine (well, I was still officially on holiday) and the boys had lemonade.

It was whilst we were here that we witnessed probably the strangest 'ice bucket challenge' yet. 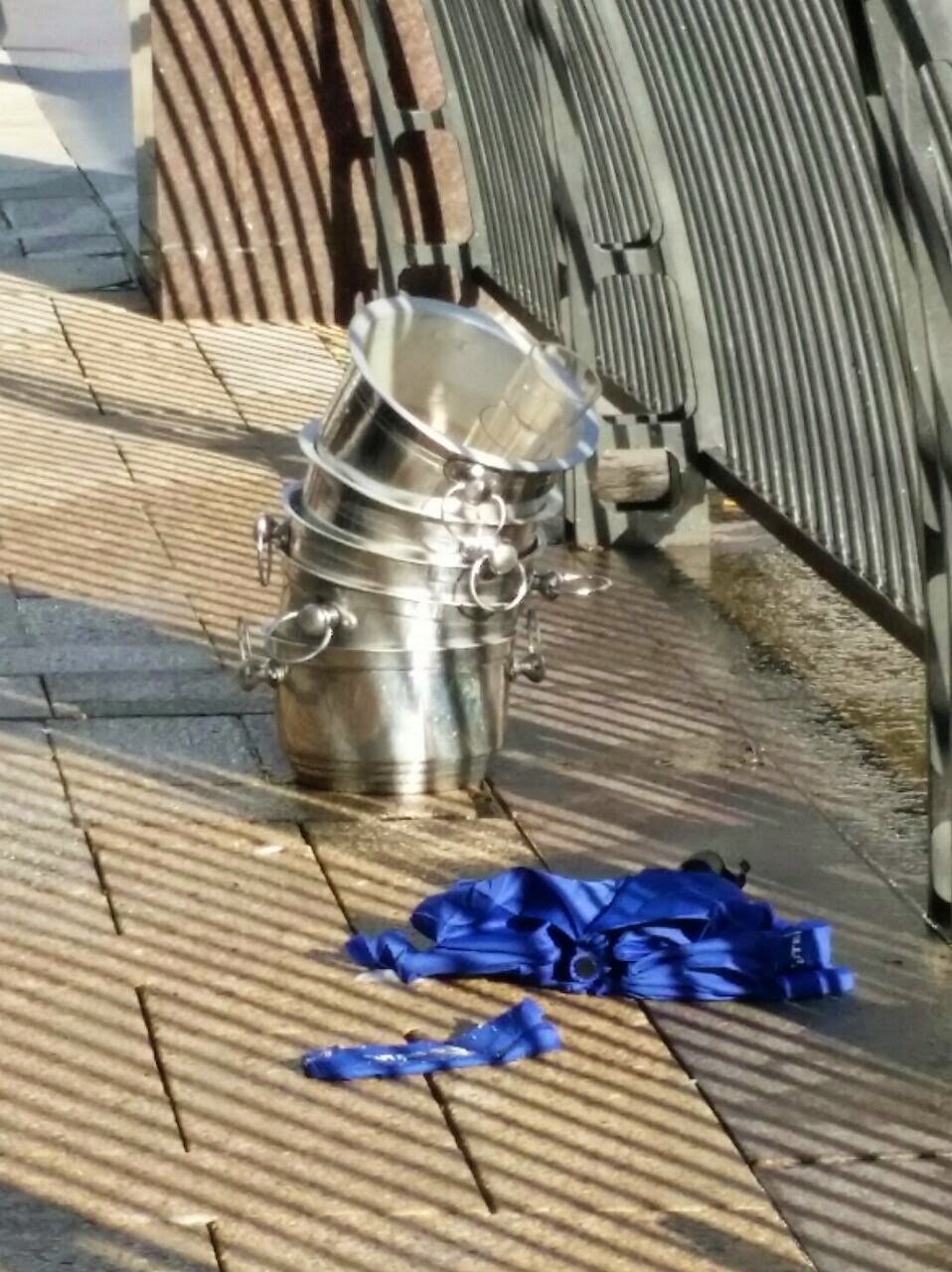 I'm not a fan of the challenge - as anyone who has challenged me knows. I did the honourable thing - I made my donation and then put the ice in a gin and tonic. I think the challenge got a bit out of hand myself, but that's just a personal opinion and who am I to question anything that raises money for charity? But here is what finally put the hole in my charity bucket...

We were sat outside enjoying the early September sun when suddenly a group of banker types came and stood next to us and started to remove their shoes and socks. We were by the Thames so I was concerned that we might be witnessing a mass drowning of the financial industry, or if we were really lucky, estate agents, but no. They were (I assume) senior managers who had all decided to do the ice bucket challenge together.

Duly stripped to their trousers and shirt sleeves they stood as their 'minions' (well, someone lower in the pecking order) came along with the ice buckets - each bucket also containing a bottle of champagne. By now both boys were fascinated and were itching to push through the suited crowd and see what was going on.

One of the waitresses sat next to me to watch. 'Some of them have spent over £100 a bottle", she said.  There were 5 bottles in 5 buckets.

'Are they donating a similar amount?" I asked her. She wasn't sure.

The senior managers then each made a long speech into the flurry of smart phones pointing at them - I was reminded of the French Revolution for some reason and then once they had finished giving their presentations (I half expected them to produce a power point display) they then all poured the buckets over themselves and then popped the champagne bottles spraying champagne, F1 driver style, over their colleagues.

It all seemed to be great fun. The boys certainly loved it and spent ten minutes kicking lumps of ice into the river.

But somehow it grated just a little on me. I can't explain why. I've heard the arguments that the challenge wasted gallons of water but here we were wasting bottles of expensive champagne - and I'm sure any charity would have been grateful for the £500 spent on it.

It was at that point I decided the ice bucket challenge had out lived its usefulness.

However, this week it is the MacMillan bake off coffee morning - I shall be taking part and am sending Papa in to the office clutching a batch of cakes to sell - hopefully for £500. I won't be eating any though - I'm on a low carb diet! (again...)
Posted by Unknown at 13:32 No comments:

Thank you so much for your responses to my last blogpost both here and on Facebook - it's made for really interesting reading.

This week we had another surprise in that we received a series of letters from one of the boys' siblings. The letters had been held at social services and they had forgotten to pass them on.

Contact between siblings separated through adoption is so important I think. I was quite shocked to think that this other family had believed they were writing to us and that we were simply ignoring them. They had written regularly for the last three years - it was so sweet to read their exploits and yet also quite annoying as we now have to share all this with the boys, whose first question will be "Why didn't you tell us this before?' Still I guess social services are very stretched and mistakes do happen.


We always knew about this sibling but it has only ever been as a picture of a baby in their life story books - so to the boys the sibling is still just a baby. Its hard to believe the child is now at school. Their sibling was removed at birth and adopted at a very young age - so they have never actually met.

So today I find myself writing two contact letters - one which I know will probably never be read by the recipient, but will hopefully prove to the boys that we did try and we didn't shut their birth mum out and the other to, what seems to be, a lovely family whom one day the boys will want to meet - a meeting that we will encourage, if the other family are willing of course.

I'm much more positive about the latter letter.

On another note, I have decided that the time has come for some lifestyle changes - after 6 weeks away from home I have gained a few kilos - by few I mean a lot! So I have taken the plunge and am now dieting and going to the gym - I can't quite believe it myself.

The boys are both happy about it - KC even told me he thought I looked thinner this morning - but I think that has more to do with the fact that he is in trouble for not doing his homework this week - aminly because he keeps 'forgetting' to bring it home!!!!

Its that time of year again.

Time to write our annual contact letter to birth mum, not that she has ever responded but I do it anyway to ensure that in the years to come when the boys decide to look for their birth family (and I'm sure they will) they know that we did our best to keep birth mum informed.

Its always such a difficult letter to write. We are told to keep it brief, not to go into any personal details and to make sure it is positive - don't dwell on any of the problems we face on a daily basis or in any way blame the birth family for causing those problems.

There's a part of me that just wants to say "You caused this mess, you destroyed our children's lives and ruined their childhood, you could have stopped the abuse at any time - but you didn't - surely you should be writing to me and thanking us for giving them any hope of a future!" Of course I don't. I say they are doing well at school, we had a great time on holiday, they love sports and games... stuff like that. It basically becomes a completely rose tinted view of our lives. A facebook view of adoption.

Facebook - love it or hate it, its part of our lives.

There will come a time when the boys end up online and so this week I did the inevitable - I looked birth mum up on Facebook... and there she was.

I went through it all, eating it up, reading everything about her - desparately trying to find something about the children - not just ours but also the others she has had removed and have been adopted elsewhere.

Just lots of lovely pictures of her with her friends and her (and I guess the boys') family. Lots of parties and pets - the usual pictures a young woman would put up on Facebook.

At first I was relieved that she wasn't showing any interest in the whereabouts of her children. I think I had been afraid to look before because I was worried that it would be filled with pictures of our kids as babies with her desparately pleading for someone to help find them.

And then I was saddened by it.

What would the boys think when they eventually see this? (Which won't be for a long time, but its bound to happen and I'd rather it was with me and papa to help them navigate it rather than for them to take a sneaky peak when no-one is looking) - how are they going to feel when they see that they aren't even mentioned?

Of course, I get that it may be too painful for her and that not everyone shares their lives on Facebook (although some of the stuff she did share seemed incredibly intimate) but with birth mum not engaging in letterbox contact my fear is that this will be the first time the boys hear from their mother again and it doesn't make for pretty reading.

It made me realise both the importance of letterbox contact and also the threat of social media, or rather unguarded social media in the lives of our children.

But for now - I'm back to writing platitudes...

Back to the beginning...